This exhibit will feature new and recent artwork by eleven award-winning artists. Informed by each artist’s enthusiasm for ancient scholars’ rocks or viewing stones, the exhibition will include ceramic pieces, wood carvings, wax works, mixed media sculptures, installations, drawings, paintings and stones that respond to this unique art form.

Recently, I have been having conversations with Kemin Hu about scholars’ rocks. Her books present this philosophy and aesthetic to the contemporary art world. Her vast personal collection has been featured in several exhibitions. Her passion for the spirituality of scholars’ rocks has inspired me to curate a show with contemporary artists in conversation with stone, landscape, geology, nature, time and place. These art works reveal our elemental connections to the natural world.

The Chinese tradition of collecting scholars’ rocks involves the elegant presentation of precious and adored stones for contemplation and enjoyment. These objects are a commonplace element in Chinese interiors and Japanese garden design. They are seen as a way to bring nature indoors. Often the result of artisanal intervention, the best stones have an intricate structure and balance. They may have been deeply carved and drilled, or surfaced with smoothed facets, but the goal is to achieve an authentic “natural” look. In today’s open global creative dialogue, this exhibition offers a fresh perspective on the subject with contemporary artists who share this common source of inspiration.

In Korea, this tradition is referred to as Viewing Stones. Movies such as "Parasite" have brought this esoteric concept into the mainstream. Whether they are seen as good luck charms or bad omens, the stones take on the aspirations of the owner. These oddly shaped stones come alive in the imagination of the viewer and suggest familiar shapes like animals, in much the same way that clouds do to the keen observer.

My studies have highlighted the pertinence of scholars’ stones within contemporary art. I see them as the original ready-made and an iconic form of abstraction. My ambition is to initiate a broad audience to this persistent form of art. This show is an opportunity to experience several contemporary artists who continue the conversation about our connection to nature that the aesthetic of viewing stones aspires to address.

Gongshi (Chinese: 供石), also known as scholar's rocks, are naturally occurring or hand carved rocks which are traditionally appreciated by Chinese scholars. Scholars' rocks can weigh either hundreds of pounds or less than one pound.

Scholar’s Rocks were widely introduced to Western audiences in 1996 through the show of Richard Rosenblum’s personal collection at the Asia Society in New York. Roberta Smith wrote in the NY Times: A Scholar’s rock “…exhibition should appeal to anyone who has ever walked along the beach, picked up a pebble or shell or piece of driftwood and taken it home; it follows this mundane impulse into the aesthetic stratosphere of taste, style and connoisseurship. In the process, it blurs the line between art, craft and nature and teaches a great deal about visual perception and imagination. The rocks are in all ways profoundly fugitive, shifting and chimerical, like three-dimensional Rorschach blots.”

Scholars’ Rocks have been referred to as the original readymade; a commonplace stone elevated to fine art by artistic provocation. They are also an iconic form of abstraction. They evoke the energy of Jackson Pollock or the expressive splash of traditional brush painting in a geological oddity. The art form of Scholar’s rocks motivates contemporary artists to consider new approaches to gestural abstraction. The rocks were carved by time, which hints at the way an artist applies brushstrokes in a painting or interventions in sculpture by the human hand. The artists in this show also incorporate layering as a technique in their artistic practices to suggest geology, time and stratification of the earth’s layers.

Kemin Hu is often asked, Do scholar’s rocks have a spirit? She says that viewers who engage with the rocks have spirit. “One of the key aspects of viewing stones is the suggestibility of the stones. True scholar's rocks or viewing stones should "suggest" something to the viewer, be more than a precise miniature representation of the landscape.” 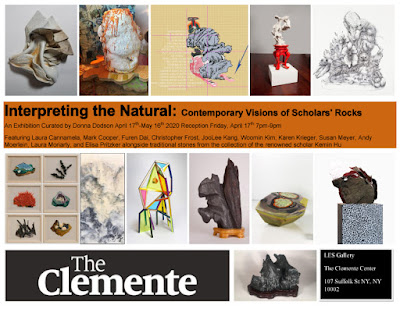 The recent film, Parasite, brought Suseok or viewing stones, to the foreground. This excellent article by Karen Chernick in Artnet explains the Korean tradition of collecting and appreciating stones...

"A Highly Collectible Rock Plays a Key Role in the Oscar-Nominated Film ‘Parasite.’ Here’s the Actual Meaning Behind It"

Suseok have been collected for hundreds of years in Korea.

Karen Chernick, February 7, 2020
Can a rock change your luck? The Oscar-nominated Korean thriller, Parasite, argues that it might. But not just any stone slab will do, of course; it has to be a suseok, a type of natural rock collected across Korea, China, and Japan for centuries.
When the film’s director, Bong Joon-ho, was a kid, he used to hike with his dad and hunt for these collectible stones. That isn’t a popular Korean weekend pastime anymore; many youngsters don’t even know what suseok are. Still, Bong incorporated one such rock into Parasite, which is competing for Best Picture (and five other categories) at this week’s gilded awards ceremony.
It was a “deliberately strange choice” to embed suseok in the film, Bong admitted to The Hollywood Reporter. The rock appears within the first 10 minutes of the tragicomedy, when wealthy twenty-something Min-hyuk delivers a suseok to the grimy basement apartment of his down-and-out friend, Ki-woo, and his family, the Kims. “This stone here is said to bring material wealth to families,” Min-hyuk explains of the gift, taken from his grandfather’s personal collection. Meant to give the destitute family a leg up out of poverty, the suseok reappears throughout Parasite during important plot points.
(Warning: major spoilers below!)

What qualities do these “scholar’s rocks” have?

Suseok are shaped naturally, by elements like wind and water, and can range in size from monumental boulders used in landscaping to smaller stones that were historically kept on scholars’ writing tables (giving them the nickname, “scholar’s rocks”).
Connoisseurs who collect suseok—either by going out into nature and finding them, or buying them through a dealer—know to look for certain qualities. “Collectible rocks should be hard in density,” explains Kyunghee Pyun, an art history professor at New York’s Fashion Institute of Technology specializing in the history of collecting. Those in the know “don’t collect loose, granuled rock, or get a rock that might break.”
Surfaces with a bit of a pattern or a wave, like the striated suseok in Parasite, are also more desirable, Pyun notes. “Round, three-dimensional is better than sort of a thin slab of stone,” she adds. “Almost like a porcelain type of quality, it should be seen from all directions.”

What role do suseok play in Parasite?

Min-hyuk presents the suseok, fitted with a custom-made base, in an impressive wooden box. The striking collectible is clearly out of place in the Kims’ dingy, subterranean apartment, where socks hang from a ceiling rack and stink bugs amble across the kitchen table.
“This is so metaphorical!” Ki-woo says, holding the rock for the first time. The suseok seems to be charmed; things quickly start to improve for the family. Though the family is all unemployed, without phone service, WiFi, or enough to eat at the beginning of Parasite, they gradually all land service jobs working for the wealthy Park family—helping clean house, drive, and tutor the children.
But the suseok resurfaces when the Kims’ luck starts to fail. When their basement apartment floods during a dramatic storm, one of the few things Ki-woo salvages from his home is the rock—which magically (and gravity-defyingly) floats up to him through septic water. He hugs the rock tightly later that night while sleeping in an emergency shelter, clinging to hope that the suseok will rescue him from poverty.
The rock next pops up when Ki-woo brings it to the Parks’ mansion, intending to kill an unfortunate couple, living in a secret subterranean bunker, who are blackmailing the Kims. By now the suseok (stripped of its base and box) isn’t just a fancy collectible. Chekhov famously said that a gun that appears in the first act of a play must later be shot, and Parasite‘s suseok would make Chekhov proud. The sculptural rock returns as a weapon, as we watch the man hidden in the Parks’ bunker use it to smash Ki-woo’s head in, over and over. An 1885 Korean painting of the Chinese scholar Mi Fu (1051-1107) paying homage to a fantastic rock, by Hô Ryôn. Image via Wikimedia Commons.

Prized suseok are found in nature. Ideally, they’re never altered by human hands. “In China or Japan, in order to accentuate the dramatic effect, they put varnish types of materials or trim a little bit,” Pyun notes. “But for Korean rock collectors, the essence is you never touch it. As is, the nature is the beauty of the rock.”
Hardcore collectors, who often fish suseok out of river streams, look for rocks that are whole entities. “It’s not like they’re going to cut out a chunk from a cliff or a rock,” says Pyun. “It doesn’t work that way.”

Who owns them in real life? How fancy are they?

Suseok grace the homes of sophisticated Korean families, but they’re not the highest valued Korean art objects—painting and calligraphy come first. “In the hierarchy of collectors, people who only collect rocks are at the bottom 30 percent,” Pyun explains, noting that top-tier art collectors might have one or two suseok, but don’t make it the focal point of their collection.
This stratification matches the hierarchy in Parasite, with the basement-dwelling Kims and their suseok reflecting the lowest level of would-be collectors.

When did suseok become popular?

The golden age of suseok collecting was during the Joseun dynasty (1392–1897), but they regained popularity in the 1980s among a class of businessmen (like Parasite’s newly wealthy Mr. Park).
The Korean economy was burgeoning during that decade and produced fresh wealth among manufacturers of clothing, wigs, and sneakers. With their new resources, these businesspeople rejuvenated the suseok tradition. “Nouveau riche [suseok collectors] are usually businesspeople, who are self-made and come from not a great academic background, but somehow made a lot of money,” Pyun notes.
“Old money doesn’t collect rocks,” she adds. “It’s new people, who need to adapt to a new status but also want to exude this air of sophistication. It’s like an easy step towards sophistication.”
A suseok is the perfect gift for Parasite’s lowly Kims, who want a shortcut to the rarefied lifestyle of the filthy rich Parks. In the film’s bloody universe, though, this fabled rock isn’t a step towards sophistication; it’s an invitation to violence.
at February 23, 2020 No comments:

Curator's Statement  by Donna Dodson This exhibit will feature new and recent artwork by eleven award-winning artists. Informed by eac...